This forum is for Basketball discussion only. Other topics will be moved to the appropriate forum.
Post Reply Previous topicNext topic
16 posts • Page 1 of 1

Carson Bischoff: Transferred to UT-Arlington, who offered him a scholarship. He played in 15 games this year for the 9-8 UT Arlington team. He averaged 1.3 ppg in 7.8 mpg and shot 19% from the 3 (6-32 on the year) for his Junior season.

Roche Grootfaam: Transferred to Texas-Tyler, a Division II school. He started 14 of 21 games & played 17 mpg. He averaged 6 ppg & 4 rpg and shot 57% from the floor in his Senior season.

Koby McEwen: Transferred to Marquette where over the past two seasons he averaged 10 ppg, 5 rpg, & 3 apg in 30 mpg and shot 36% FG’s and 31% from the 3. He did not play in any NCAA tournament games while at Marquette.

Nigel John: He originally commited to USU, then Washington State, then landed at Eastern Oklahoma State JC. He has started 9 of 16 games this year for the JC and is averaging 8.2 ppg, 7.8 rpg, and shooting 51% FG. His team is 8-8 & still has 4 games left.

Ben Fakira: Went back to Australia. He hasn't played competitive basketball on a team from what I could find.

Crew Ainge: Transferred to Div. III Babson, where he averaged 11 ppg & 4 apg in 32 mpg shooting 35% from 3 last year. They did not have a season this year.

Jeff Otchere: For fun I included him in here. The famous poster Usufan5477 proclaimed in 2018 that Duryea should not be fired because (among other reasons) he had the top remaining JUCO big man ready to come to USU & fix our big man problems. This was Otchere. In two seasons at Stony Brook Otchere averaged 4 ppg, 5 rpg, & 2 bpg in 18 mpg shooting 55% FGs. He transferred to UT Rio Grand Valley this year for his SR season and averaged 5.5 ppg, 3.7 rpg, 2.8 bpg in 16 mph for the Vaqueros.
Last edited by Roy McAvoy on March 23rd, 2021, 1:29 pm, edited 1 time in total.

Thanks! I've wondered about some of these guys.

Thanks for posting this information. I'm surprised Daron Henson wasn't better in college. I thought he had real potential.

These users thanked the author Aggie formerly in Hawaii for the post:
bluegrouse

I did as well.

These users thanked the author slcagg for the post:
Aggie formerly in Hawaii

Doesn’t seem like we missed much other than with JK3.

These users thanked the author ineptimusprime for the post:
Real Life Aggie

Interesting read. Thanks. Also, important info to keep in mind regarding your 13=13 thread. Sometimes guys leaving doesn't end up hurting as much as we think it will.

These users thanked the author Aggie702 for the post:
Aglicious

We didn't land Otchere and look what happened to us instead. 10/10 colossal mistake to dump TD.

These users thanked the author Real Life Aggie for the post:
aggieguy13

For all of your IT needs visit http://www.sidelogic.com

JK3 was a much more efficient player. He isn't a good outside shooter, but he gets to the hoop. Koby is a poor shooter that just keeps jacking.

These users thanked the author Aggie formerly in Hawaii for the post:
ProvoAggie

What ever happened to Lurch?

Just another day in the (Aggie) Brotherhood

A great thread would be what happened to the kids that had been offered schollies and went somewhere else. A few of those are here but I wonder about the rest.

But...the 2nd name was Malik Zachary from a Florida JC. He went to Buffalo and was suspended for stabbing a Canisius player in a summer pickup game. 22 said we had interest but hadn't offered. Disposition aside he might have been a good "weapon" vs BYU.

These users thanked the author Bank Shot for the post:
AggieFBObsession

But...the 2nd name was Malik Zachary from a Florida JC. He went to Buffalo and was suspended for stabbing a Canisius player in a summer pickup game. 22 said we had interest but hadn't offered. Disposition aside he might have been a good "weapon" vs BYU. 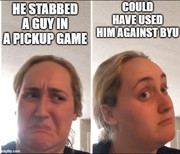 From that list, T Knight and Nigel John look like the two I'd most like to have. Koby or JK3 would be solid too, but we really need guards that can shoot.

"I have no idea what I'm doing, but I know I'm doing it really, really well." -Andy Dwyer

What about Quincy Bair?


Sent from my iPhone using Tapatalk